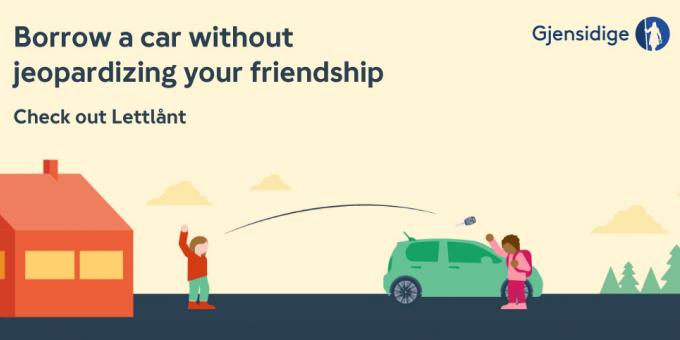 Lettlånt (“Easy to borrow”) is a platform created to boost peer-sharing of personal goods and valuables and make it easy, safe and social.

Lettlånt (“Easy to Borrow”) is a platform created to boost peer-sharing of personal goods and valuables and make it safe, social and easy.

Many of the things that we buy and own are rarely used. On average, our cars are parked 95 percent of the time (Barter, 2013). Power tools are used less than 13 minutes during their lifetime (Botsman…

Lettlånt (“Easy to Borrow”) is a platform created to boost peer-sharing of personal goods and valuables and make it safe, social and easy.

Many of the things that we buy and own are rarely used. On average, our cars are parked 95 percent of the time (Barter, 2013). Power tools are used less than 13 minutes during their lifetime (Botsman & Roger,2010) and the average Norwegian private holiday home or cabin is empty and unused 87% of the time (Prognosesenteret, 2015). This means that we buy, consume and waist much more than we should, something that puts high strain on the environment and natural resources. Over-consumption and over-production are strong drivers of driving the climate crisis.

Luckily, people are more and more inclined to share, borrow and lend things that they need or do not use. In the McKinsey-report “Generation Z and its implications for companies” it states that Gen Z (1995-2010) (and increasingly older generations) drastically are changing behavior as consumers. The concept of “consumption” means having access to products or services, not necessarily owning them. As access becomes the new form of consumption, being able to get easy access to goods and services they need will create value. Products become services, and services connect consumers.

The starting point for our journey was: How can we encourage people to share more and how can Gjensidige take a position here as a facilitator of the process? What are the problems we need to solve and the friction we need to minimize in order for a worry-free sharing process?

The basis for the design of the platform are the social relations between peers. The project wanted to create the application from a systematic understanding of how people think and how they make decisions. The reason for this was that it was important for us when designing the user interaction, that we should not in any way try alter social behavior or create new habits or behavioral patterns for people. We wanted to create an interaction design that was as open as possible in order for the social relation to play out in its natural course, but still create a certain level of structure in the loaning process so that it had:1. Just a hint of formality between peers 2. Intuitive functionality and features that would make the lending process safe

The main issue in peer-sharing that we encountered in discovery-phase was related to worries about damage. We needed to remove that friction from the process.A research-report that investigates the social, environmental and climate implications of the sharing economy published by CICERO (Center for International Climate Research) states that close to 60% of the respondents, even though positive about sharing, are worried about the items they are lending out gets damaged. The same applies for borrowing things from other people; the worry about damaging them creates friction and makes people less reluctant to lend out their belongings or borrow from others. Hence, a key requirement was that the platform had to make the lending process easier to commit to.

The project worked from the hypothesis that lending process would go more smoothly if the lender could pay a small premium for a loan of an object. So we designed a new product for this platform, a micro-insurance with a low premium (NOK 99,-) and validity from one to max eight days. Micro-insurance is a business area that is experiencing rapid growth. IMARC Group expects the global market to reach US$ 111.84 Billion by 2027, exhibiting at a CAGR of 6.1% during 2022-2027.
Securing a transaction between to peers with a micro insurance issued by Gjensidige would require mechanisms for identifications and registration, secure payment and safe storage of sensitive information. This was added to the list of requirements for the platform

Social applications tap into some of the very elements that make us human, our addictions, desires, anxieties and joys. We wanted the social dimension to be the core of the platform. This was supported by the CICERO research article mentioned earlier that shows clearly that almost 2/3 of the respondents agree that social platforms are well suited for sharing and peer transactions.
An example of how we utilized this in the design, is where we strive to preserve the social structure and the integrity of the relation between peers by only permitting the individual that borrows an item to buy a micro insurance. That way it becomes more of a gratitude gesture from the borrower who wishes to show respect by paying a small amount in order to make the lending-process worry-free for both parties. Social was our third, key requirement.

Our decision was in 2021 to start with an MVP and a product which could be used as a vessel for launching our platform. We wanted a pilot to start to working iteratively with customers and based on usage and feedback, build and scale the platform and populate with new products and features.

Gjensidiges is continuously developing broader value propositions so that we may have a relevant position in the everyday life of our customers. One of the focus-areas is being preferred problem solver and partner for mobility solutions. Hence, the use of private cars natural place for us to start looking for opportunities and spaces the market with untapped potential.The conception was eventually based on a possible uncovered customer problem and insurance needs founded on the friction and uncertainty in the process of lending out or borrowing a car to a peer. We based the idea for MVP on the hypotheses that :1) there is friction and uncertainty associated with borrowing or lending private cars in close relationships 2) the market is of a significant size, ie the frequency of loans and lending of private cars in Norway is high and 3) there are currently no providers of solutions in this market that address the problem.

Verification of the problem

Next step in the process was to test our hypothesis and verify the problems we wanted to solve. First of all we did a quantitative market-survey and proceeded to send out a questionnaire to 6000 of our customers about their habits, motivations and hesitations if any, surrounding peer-sharing of cars. We also wanted to find out if this was a monetizable problem and verify that this had a market- and business-potential interesting enough for us to risk an investment .Secondly, we did a qualitative study where we user-tested and interviewed about 30 potential users.

An important criterion for rolling out a project of this magnitude is that it has significant marked potential.
The quantitative analysis shows us that there are about 2 million car drivers in Norway. When we dig into the survey-data we find that approximately 10% of them would feel safer if the car the borrowed had some kind of peer-insurance.
The respondents tells us that this would remove some of the friction in loaning a car from a friend and they would be willing to pay NOK 99,- (€10) per day for such a security.
Given that the average car loaner borrow a car from a peer in average 3 days during a year, that gives us 540.000 car loans each year. Multiply that with a price of the micro-insurance og NOK 99,- that gives us a marked potential of about NOK 54 millions (€ 5,5 million) each year.

The work with Lettlånt is done according to modern innovation methodology where we worked hypothesis-based and close to the users throughout the process.
Our goal was to design an easy-to-use, universal solution who anybody (not just Gjensidige customers) could use a social platform for lending out or borrow a car from a peer. In addition, also making sure the agreement is worrying-free, by issuing an insurance from Gjensidige for the loan.
Five iterations with user journey design and user tests were conducted. In the user tests as well as in supplementary quantitative studies, we received strong evidence of our hypotheses. We also managed to land a user journey that was well received by the users in the tests.
Based on the initial design process the project went ahead to build a minimum version of the service (MVP), with a plan for a quick launch in the market. The goal was to come up with something fast and cheap, and comprehensive enough to further confirm our hypotheses together with the users.

How does it work ?

1. Download the app from App Store or Google Play
2. Log in with ID-porten is (which is a common log-in solution for many Norwegian financial – and public services)
3. Chat with the friend you want to borrow from in the app
4. The lender gets an SMS, downloads the app and the conversation is rolling
5. Borrower pay for the insurance with Vipps (Largest Norwegian mobile payment application designed for smartphones can be used by anybody)
6. A micro-insurance policy is issued by Gjensidige. Lender pay NOK 99,- per day he or she wants to borrow the car
7. Get the keys and take a drive up in to the beautiful Norwegian mountains

Our innovation library is open to Efma members only.

If that is your case, log in to access the full page.
If not, you can learn more about Efma membership here.